By Chris28th February 2020No Comments

I don’t know about you but I’m getting a bit fed up with the amount of rain and storms we’ve been having of late. As I sit and write this blog, the weatherman on the TV in the background is telling his viewers about the pending storm, Jorge, due to batter the UK later today. More rain, more wind, more disruption and ultimately, more flood damage. Fortunately, in Essex, as it’s quite flat, flooding isn’t quite as bad as other parts of the UK but flooding doesn’t necessarily have to come from a river that’s burst its banks or an excessive amount of rainfall over a short space of time, flooding can occur from a broken pipe or burst water tank in your loft and can cause thousands of pounds worth of damage. 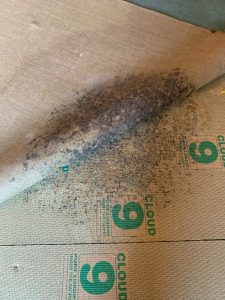 As we at Powerdean operate high powered carpet cleaning extraction machinery, we often get calls asking us to visit properties which have been unfortunate enough to experience some form of flood damage. A pipe has burst in the loft overnight and continued to gush water which has worked its way through the ceiling or down the walls saturating the carpets in the process, rendering them unusable and at immediate threat of being contaminated with mould if the carpet is not dried and cleaned quickly. I won’t go into detail about mould, as I’m sure it’s common knowledge that if moisture can’t escape, it creates mould and mildew, the same goes for wet carpets. Mould is extremely hazardous to your health so needs to be avoided at all costs or treated quickly, and is one of the reasons why rental carpet cleaning machines and cheap carpet cleaners should be avoided as carpets are left very wet and at risk of generating mould spores, I’ve seen it!

If you wake up one morning and find yourself in this unfortunate situation, and we sincerely hope that you don’t as we can only imagine it’s a huge headache sorting insurance companies, repairing ceilings, pipes, tanks, carpets, electrics etc, your first port of call is to obviously call out a plumber and get whatever is leaking, fixed (hopefully you’ll have turned off the water supply). Once that’s been arranged, you’ve spoken to your insurance company etc, you’ll need to try and get your house habitable and getting everything dry has to be top of the list.

Carpets & Upholstery need to be dried and cleaned fast; we would suggest within 12-24 hours of the leak occurring to avoid the moisture from starting to turn to mould (luckily we can be on hand for emergency call outs). Saturated carpets will mean saturated underlay, saturated underlay will mean a saturated sub floor. As the air flow beneath a carpet is non-existent, the moisture just won’t dry quick enough and mould will start to form and contaminate the back of your carpet, the underlay and the sub floor. If that happens then you’re replacing the lot. If you can get us out quick enough to it then we can use air movers and our extraction equipment to remove as much of the water as possible and dry areas quicker than if it’s just left, increasing the success rate of not having to replace anything.

We’ve recently been out to a property where unfortunately the water had sat in the carpet, saturating the underlay and the sub floor, once the carpet was lifted, the damage was beyond repair, and there wasn’t a lot we could do for our client, wasting almost £1000 worth of wool carpet in the process, wool carpet that otherwise was immaculate.

If you experience a leak or some form of flood damage our advice to you is to get as many fans, air movers, heaters or dehumidifiers as possible plugged in and running quickly. Open the windows and get a good air flow through your property so that any moist air is moved on and the flow continuously keeps the air moving, this will hugely help drying things out until you’re able to get a company like ourselves out to access the damage and help speed things along that little bit more. Any NCCA registered carpet cleaning company will then hopefully have the correct chemicals and products to be able to clean your carpets and upholstery so they can be back in use as quickly as possible. Be aware that it is not possible to clean underlay so there is a good chance that your underlay may require replacing, however we have close relationships with some of the best floor fitting companies in Essex and can arrange to have someone visit you and replace or re-fit carpets. You’re in safe hands with us.